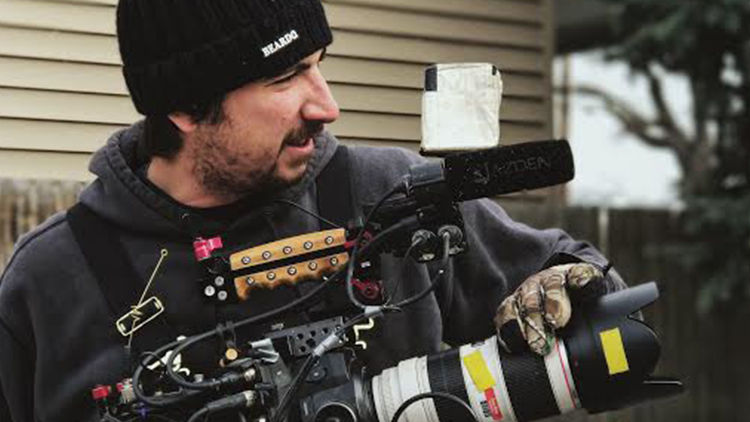 Mike James is a Camera Operator for HGTV's Good Bones, a series that follows the mother-daughter team of Karen E Laine and Mina Starsiak as they renovate homes in Southeast Indianapolis.

We sat down with Mike to talk about why he loves filming in Indianapolis and what got him involved in this crazy industry in the first place.

"Indy has this unique blend of the old and the new. It's simultaneously vintage and modern which creates a welcoming yet spontaneous atmosphere."

A1 Mike: My current occupation is Camera Operator for HGTV’s Good Bones and we are filming Season Two currently, right here in Indianapolis. In the past I’ve worked in post-production as an editor as much as I’ve worked in camera department.

Q2 Brie: What got you into this business?

A2 Mike: The VHS C camcorder my dad bought when I was 9 or 10. I started making videos as soon as it showed up and haven’t stopped since. My first job in the industry was in 2008 in LA. I worked as the submission screener/production assistant on the 20th season of America’s Funniest Home Videos.

Q3 Brie: Do you have a favorite filming location in Indianapolis?

A3 Mike: I love where Garfield Park meets Pleasant Run Parkway. Garfield Park is beautiful but I personally love that portion of the Pleasant Run Trail. When I need nature b-roll that’s my go-to spot. The squirrels will run right up to you and beg for food.

Q4 Brie: What’s your favorite part about working in Indianapolis?

A4 Mike: My favorite part of working in Indianapolis is the vibe of the city. Indy has this unique blend of the old and the new. It’s simultaneously vintage and modern which creates a welcoming yet spontaneous atmosphere. There’s an "anything is possible” attitude.

Q5 Brie: If you had to give producers a reason to come to Indy what would it be?

A5 Mike: The variety of locations within a centralized area is one of the reasons I would give to producers to come to Indy. To the north flat rural countryside, to the south steep hills with dense forests. It’s two hours to the Ohio river, three to Lake Michigan. Indianapolis as a city has a great deal of variety in locations and looks. Cobblestone streets, brick homes, and spacious parks. You can make Indy and the surrounding area play for any place in the country on the screen.

Q6 Brie: What’s your tip for up and coming filmmakers?

A6 Mike: Start doing it! Grab whatever you can and start telling stories. It’s something that you learn by doing so don’t wait to get started. Now, even phones can be used to shoot a feature film with so if that’s all you've got, then use it. There’s no one-way or golden ticket into filmmaking. Persistence and constantly learning through experience seem to be the most common success combination.

Q7 Brie: Favorite project you have worked on in or outside of Indiana?

A7 Mike: A couple years ago I co-wrote and co-starred in a film titled “Dude Bro Party Massacre 3” with all my friends from 5secondfilms. It was the grand finale to years of work doing the web series every single day. We shot a majority of the film at Big Bear mountain in southern California. We had about two weeks up at Big Bear and it was the most over-the-top ridiculous experience of my life. It was like film nerd/frat bro summer camp and I think that really comes through in the movie. It’s hard to describe how much fun it was to make.

Stay tuned for more bios on our local filmmakers!