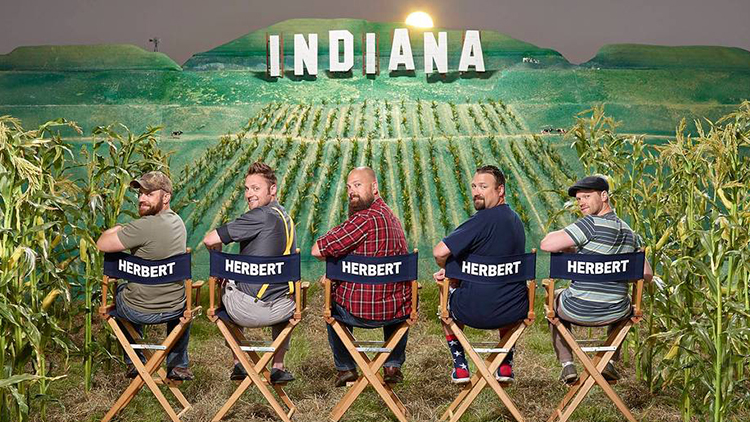 “Indiana is our home. We have reached a level of success that would afford us to relocate anywhere to do this work, but we love it here in Indiana. We chose not to chase success, but rather to bring that success here. The crews we can build using folks here in Indiana are as talented as it gets… and these people are our friends and neighbors. It's not business, it's personal. We’re all in this together.”

Brie: What got you into this business?

Dave: We got ourselves into this business by simply being extremely creative story-tellers with a passion to bring those stories to life for the purpose of entertainment. We decided one day out of the blue that we could and should be making movies and other videos, and without any knowledge of anyone in the business, nor any background in film, we taught ourselves and dove right in -- and in 2009, we won the Doritos Super Bowl Ad contest winning a million dollars with our #1 Super Bowl ad that we wrote, directed, edited, and produced right here in Indiana. And, we continue to elevate ourselves to the next level with every project we collaborate on.

Brie: Do you have a favorite filming location in Indianapolis?

Dave: Cities, like Indianapolis, that work with filmmakers are MUCH preferred to film in and to return to for future projects. Each project presents different needs, and our favorite always seems to be the one we're currently working on. That said, locations that offer the most beautiful and compelling scenes while having the least amount of hoops to jump through are always best. We are located one hour from Indianapolis, in the small rural town of Batesville, Indiana. Our reputation, and relationships with the people of our home town grant us an amazing treasure of location opportunities as nearly every type of business and home from here to Indianapolis has welcomed us with open arms for one production or another including schools, restaurants, bars, offices, gymnasiums, funeral homes, hotels, grocery stores and more.

Brie: What’s your favorite part about working in Indianapolis?

Dave: Indiana is our home. We have reached a level of success that would afford us to relocate anywhere to do this work, but we love it here in Indiana. We chose not to chase success, but rather to bring that success here. The crews we can build using folks here in Indiana are as talented as it gets… and these people are our friends and neighbors. It's not business, it's personal. We’re all in this together.

Brie: If you had to give producers a reason to come to Indy what would it be?

Dave: We can do what we do here in Indiana at a more attractive price point than most other places. Plus, it's fun and rewarding working with the most amazing group of people who are among the most talented on the planet.

We had a client from a large well-known company fly in from Florida for a commercial we were shooting for them here in Indiana, and before the end of the day, we overheard this gentleman on the phone having a conversation with his CEO, and he said, "You won't believe the cast and crew on this shoot in Indiana - they are like a family. Many of them hugged one another when they first arrived. Nobody was yelled at or fired. Their teamwork and hard work paired with respect and friendliness is something I've never seen before." In hearing this, the first thing we thought was, "WOW, I'd love to see what their other shoots have been like." Because, for us, it was just a normal day in Indiana. I think sometimes we might take Midwest hospitality for granted, because that's just who we are on a day to day basis, but it has been acknowledged time and time again by clients, executives and producers who have traveled here from various parts of the country to be on the set of one of our productions.

Brie: What’s your tip for up and coming filmmakers?

Dave: Be creative! Be innovative! Be unique! Be yourself! Work on as many projects as you can, because each time you do you are getting better - therefore, the more you do, the better you become. But, do it for the right reasons. If you're looking to be rich and famous, then best of luck to you.  However if you want to succeed as a filmmaker it takes more than just luck. Use your skills, and don’t stop developing them. Make films. Make shorts, features, commercials, good films, bad films, etc… keep filming! Always remember, filmmaking is a team effort, so meet everyone in the industry that you can, and do a lot more listening than talking.

Brie: Favorite project you have worked on in or outside of Indiana?

Dave: If you go by the impact our work has had on the most number of people, obviously our #1 Super Bowl spot jumps out as a favorite. However, that's too easy, and we have a number of Indiana projects that come to mind, so picking a favorite is difficult.

Having fun and loving what we do is part of our recipe for success. Our "Tool Fight" commercial for Pepsi Max was a complete blast to film, and most of the time we Herbert Brothers are working behind the camera, but all five brothers play a small role acting in this commercial, so it will always hold a special place in our hearts.

For more interviews like this, check out the rest of our Q+A’s on our blog!