The Significance of the Indianapolis Motor Speedway in Film
May 26, 2017 • Caitlin Flowers 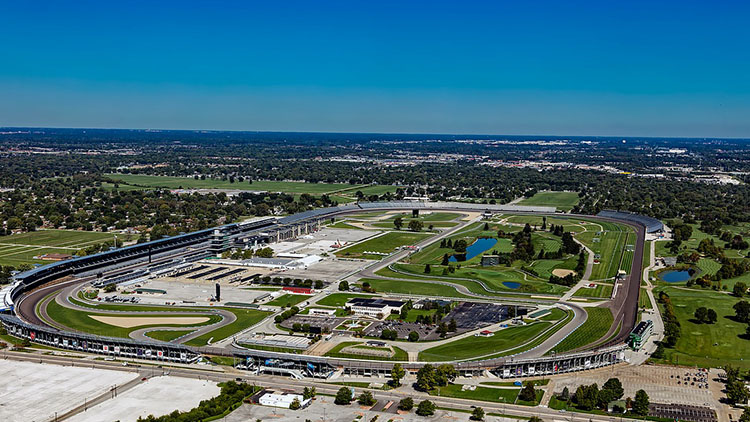 Why would 300,000 people watch 33 drivers fly 230 miles per hour for 200 laps in the city of Indianapolis? The “Greatest Spectacle in Racing” has become just that — a month long event starting in May when Indianapolis transforms into the racing capital of the world. Even globally, saying you’re from Indiana sparks a conversation about whether or not you’ve heard the iconic phrase: “Ladies and gentlemen, start your engines.” It’s a badge of honor and a point of pride among Hoosiers and racing fans alike.

Hollywood has noticed this, setting the Indianapolis 500 as an event in several films. This started in 1929 with the first-feature film to showcase the Indianapolis Motor Speedway, Speedway, a silent film showing the "time trials" for the race. Jimmy Stewart starred in the movie Speed (1936) about an engineer and a test driver entering the Indy 500 to test the limits of their new carburetor design. Clark Gable, Mickey Rooney, and Paul Newman all made their way to the Speedway in the movies The Big Wheel, To Please a Lady, and Winning. Most recently, the animated movie Turbo showed a speedy garden snail racing at the Indianapolis 500

So what makes the Indy 500 so special?

This year's race is exciting as Spanish racing driver Fernando Alonso is shaking up the race by crossing over from Formula One to compete in the 500. Alonso is already a two-time champion, but this is his first attempt at the Indy 500. He brings over a whole new group of international fans to watch his performance in Indy. Coming into the race as a rookie, Alonso has much to learn, but his nine days of practice could give him a solid head start.

The race started in 1911 with 40 drivers who dared to race on the world’s largest track. Now, the danger and thrill comes from the terrifyingly fast speeds. Being at the Indianapolis Motor Speedway puts you right into the action, close enough to feel the vibrations of the drivers racing past. Fans and families from all over the world have established an annual tradition to make the pilgrimage to see the spectacle for themselves.

It’s hard to imagine Indianapolis without the 500, but it’s impossible to picture the Indy 500 anywhere but at Motor Speedway. With all the events and activities in the month of May, the Indy 500 is a can’t-miss experience everyone should do in their lifetime.

To learn more about the Indy 500 and how you can experience it, visit their website: http://www.indianapolismotorspeedway.com/events/indy500