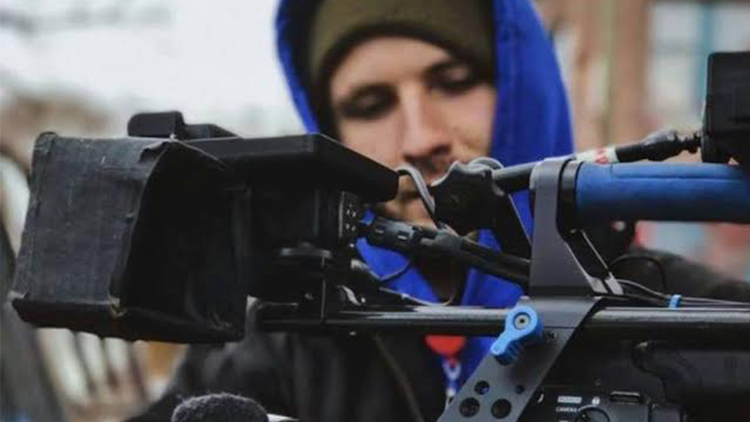 Jake sat down with us and talked about his journey into the film industry.

“I would say that networking and a strong work ethic are extremely necessary (to filmmaking). Indiana Film Makers Network is a Facebook group that’s a great starting point to meet local filmmakers.”

Jake: I am the AC for an out of state production company on a home renovation show that takes place in Indianapolis.

Brie: What got you into this business?

Jake: Throughout college, I would freelance for a friend who would shoot corporate events and weddings. As soon as I saw the first cut of one of his events I helped shoot, I was hooked and began branching out to friends and classmates to do projects.

Brie: Do you have a favorite filming location in Indianapolis?

Jake: That’s a hard question to answer! I love finding cool locations that one may not see that often. I love when I see a unique location and try to figure out where it's at. Other than that, I would say that I have enjoyed any shoot that's been in downtown Indianapolis.

Brie: What’s your favorite part about working in Indianapolis?

Jake: I enjoy the size of the film community here. I have been lucky enough to be a part of shoots throughout the last year and meeting nice, hardworking people. If I'm ever a part of a shoot, I know I can recognize at least one person on the call sheet from a previous job.

Brie: If you had to give producers a reason to come to Indy what would it be?

Jake: Indy has a strong film community and beautiful locations. I also believe Indiana has a lot of stories to be told that would be great for documentaries or feature films.

Brie: What’s your tip for up and coming filmmakers?

Jake: If I were to give a tip to up and coming filmmakers, I would say that networking and a strong work ethic are extremely necessary. Indiana Film Makers Network is a Facebook group that’s a great starting point to meet local filmmakers. As far as work ethic, always work your hardest and be available for your department whenever they need you.

Brie: Favorite project you have worked on in or outside of Indiana?

Jake: For a project inside of Indiana, I would say it was being a PA for a Peyton Manning video sponsored by Gatorade. The shoot only lasted two days, but I got to meet some incredible people and shoot in the Colts training facility.

For more interviews like this, check out the rest of our Q+A’s with local filmmakers on our blog.