Filming Locations in Indy for a Sports Film
May 26, 2017 • Caitlin Flowers 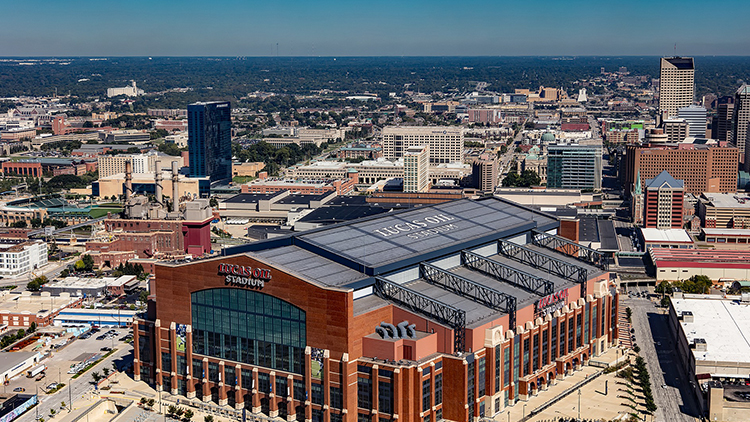 Finding the perfect sports arena to film at couldn’t be easier in Indianapolis—especially considering three of them are within a four-block radius. As the host of the Big Ten, NCAA Final Four, the Super Bowl, and of course the Indianapolis 500, this city is accustomed to especially large events. Part of this is the ten-minute drive from the Indianapolis International Airport and the plethora of hotels downtown.

Lucas Oil Stadium
Lucas Oil Stadium tops the list as the largest Hoosier sports arena, with over 63,000 seats. Lucas Oil features a modern design, but the stand-out feature is the retractable roof, the largest in the NFL. It can provide indoor or outdoor lighting, as well as a view of Indianapolis. Lucas Oil connects to the Convention Center, and is within walking distance from multiple hotels. Lucas Oil has hosted big-name concerts and the TV show Parks and Recreation filmed two episodes here. Score!

Bankers Life Fieldhouse
Bankers Life has more of a retro aesthetic but with modern conveniences. When the Pacers or Fever aren’t playing a game, Bankers Life hosts concerts, Disney on Ice, or even Cirque du Soleil. It has indoor truck docks and drive-in ramps to make equipment mobility easy. There are even pre-wired camera locations for any audio-visual aspects. The standout feature is the 37’ LED scoreboard screen hung above center court. Production offices, star rooms, and even interview rooms can be staged for any type of production requirements.

Victory Field
Located by White River State Park, Victory Field serves as the baseball park for the Indianapolis Indians. The best feature of Victory Field is its breathtaking view of the Indianapolis skyline, opposite the stadium seats. The 14,000 seat facility provides an old-time or small-town feel. Facing across from the J.W. Marriott hotel, its central location lends itself to easy downtown access.

Carroll Stadium
You may only know Carroll Stadium from an Indy Eleven soccer game, but the 75-yard turf-covered field also has a track circling it. The shorter stadium seating places audience right near the action, and can make it easier to make the seats look filled for filming. Carroll is located in the heart of the Indiana-Purdue University campus for a collegiate feel.

The Coliseum
Home of the Indy Fuel, this skating arena has public and private skating all year long. Built in 1936, the Coliseum has more of a vintage element. While primarily in ice configuration, it can also be removed for any production needs. The Coliseum is located on the Indiana State Fairgrounds, perfect for heading outdoors for the amphitheater, amusement park, or large midway you need.

Indianapolis Motor Speedway
If you’re looking for enough space for a large-scale production, the massive Indianapolis Motor Speedway could house the White House, Yankee Stadium, Churchill Downs, the Rose Bowl Stadium, Liberty Island, the Roman Colosseum, the Taj Mahal, and Vatican City—with room to spare. The length of the track is 2.5 miles. The recognizable Pagoda could be an excellent backdrop for any racing film. The track also houses the climate-controlled pavilion, suites in Gasoline Alley, and a large media center for any indoor needs. The greatest spectacle in racing takes place here, what better place to film your next project?

Know of a location in Indy worth talking about? Submit your location on our website to be added to our locations database!