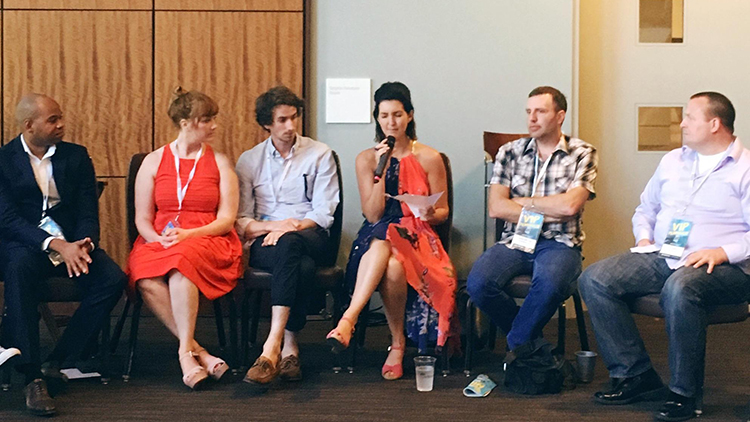 Raising money for films is never easy. “I work two other jobs, so I don’t sleep,” said Obadiah Baker, executive producer of Something Blue, “But for me, that was a way to fund my film.”

The Narcissist’s director, writer, and actor Quincy Rose agreed. “I don’t make these films to make money, I make them for the opportunity to make the next film.” The spirit of Indie films is in the low budgets and tight time schedules. Quincy Rose added, “To keep the budget small, I only used four actors, a three-man crew, and filmed in five days.”

For Hoosier filmmakers, Indiana was featured a couple of times. “I wrote my film right after graduating DePauw University in Greencastle, Indiana, and the place is so inspiring I knew I wanted to film there and include all these beautiful Indiana towns,” said Henry Johnston, director of King Rat. Chatterbox director Daniel Arthur Jacobson agreed. “Even though I’ve been freelancing, I try to do at least one passion project a year. You walk in the Chatterbox in Indy and you know there’s history. I wanted to selfishly learn the story for myself.”

We Are EC: The Untold Story of East Chicago Basketball revolves entirely around the multi-cultural city of East Chicago, Indiana. Director Tim Helfen said, “High school basketball is big in Indiana and East Chicago, which is up by Gary, has over 70 different nationalities represented. The players in the documentary say sports wasn’t the end for them, it was a means to college. Being in that town and on that team brings people together.” Teresa Sabatine added, “People might think a small town in Indiana wouldn’t be able to get along with different types of people, but you flipped the story and showed how it really is.”

Whether from Indiana, New York, Texas, or Italy, all filmmakers agreed getting their film on the big screen was the most satisfying part of the process. The Indy Film Fest runs from now until July 23, see these films and more before it’s too late!