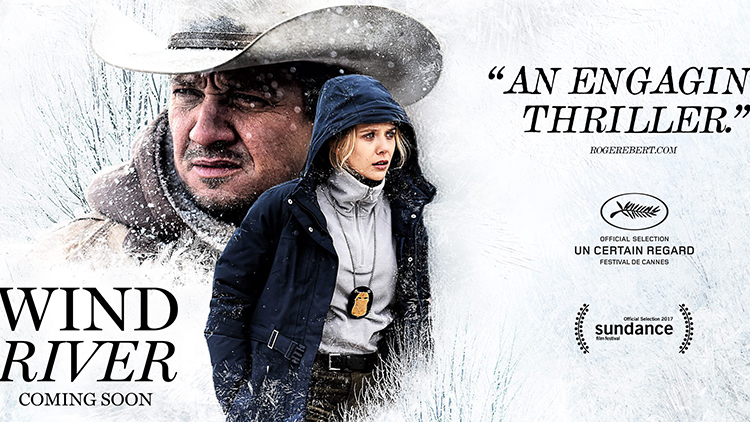 I cannot tell you how long it has been since I left a theatre with a sense of raw emotion and inspiration.

After attending the opening night of the Indy Film Fest I found that feeling again.

When you watch the film Wind River you will cry, laugh, hurt, be moved, get angry, and be motivated. It is a heartbreaking and inspirational film.

The story follows a local tracker/hunter and a FBI agent as they try to find the person responsible for the rape and murder of a local American Indian girl on Wind River reservation. Wind River holds the missing piece of most actions films: a heartbeat. Unlike Renner and Olsen’s characters in Avengers: Age of Ultron, these characters aren’t superhuman. Their characters are shockingly raw and vulnerable. Wind River doesn’t shy away from true emotion; it uses it to create a captivating and powerful thriller. As you watch this case unfold on screen, you are horrified by the conditions American Indians must live in and the daily despair they face. You are also touched by the strong connections they have with one another.

The main character, Cory (played by Jeremy Renner) is a man touched by tragedy in his own life and still seeks to find closure and meaning to the pain. Throughout the film he is a steady, quiet source of strength—doing whatever needs to be done to bring justice to the victim and her family.

The FBI agent, Jane (played by Elizabeth Olsen) is thrown into this private world on the reservation and must rely on Cory to guide her through the customs and protocols on the land. You journey alongside her as she faces the ongoing hardships and reality of a grieving family and what life is like on the American Indian reservation.

The film has many deep moments where you see into the human soul and find little bits of yourself. It also has a lot of action and moments where your heart is pounding, scared to see what is next, but not daring to look away.

A brief discussion panel followed the screening in The Toby at the Indianapolis Museum of Art where we heard from actor Tokala Clifford about his role in the film. He spoke about the authenticity of the film and how it really portrayed some of the experiences he has faced growing up on a reservation. It was amazing hearing him speak about his culture and the joys and trials they face. Tears came to his eyes as he confessed the burden he feels to constantly watch over all of his female relatives—because the scenario from the film is all too real on reservations. “I have felt concern for the women in my family. This writer [of Wind River] is putting this in the face of the world in the right way. [Director] Taylor Sheridan made sure it was told within the power of the real situation.” Only in reality, most cases are not investigated or prosecuted.

He also spoke about the exciting but slow shift of acting opportunities for American Indians in film. He recalled in his first acting years he would portray the stereotype roles of a silent, brooding Indian. He says that more films are portraying American Indians as people—real people. Other movies have attempted to portray American Indians in a real sense but Tokala reflects, “Dances with Wolves was a step forward in filmmaking for American Indians, but guess what? Our savior was Kevin Costner.” This shift is shamefully taking too long but is finally on the rise with movies like Wind River leading the way. It is one of the few movies that does justice to the American Indian culture and portrays characters of depth and emotion all with a deep sense of humanity. That was a main goal for writer and director Taylor Sheridan who took great lengths to ensure authenticity and quality in this film, says Tokala.

The screening of Wind River and the Q&A that followed are reminders of the power of film festivals on our culture and communities and the importance of filmmaking.

If you want to be moved, if you want to leave a theatre with a feeling that sticks with you and motivates you to do something—see Wind River.

Wind River is coming to theatres near you on August 4th—be sure to see it opening weekend!

If you missed Wind River but are looking for other ways to be inspired don't fret. Indy Film Fest continues from now until July 23rd offering you almost 100 films with screenings and powerful discussions daily.

Make sure to check out other films screened at the festival at www.indyfilmfest.org.